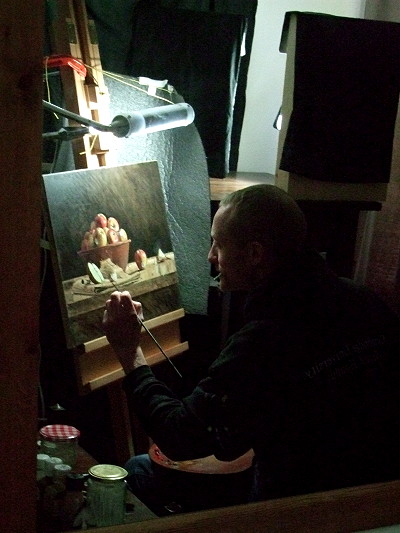 London Greenwich based artist Benjamin Hope,  has the most remarkable  ability to paint still lifes so convincingly that you feel it must be a photograph or the actual thing.

Having got himself one hell of an education (last stop PhD in theoretical  physics from Cambridge ) and then three years in the city  ( to amass money) not to mention a very serious running career;  now, at long last, at the age of 35, he is getting down to making a career of his painting. 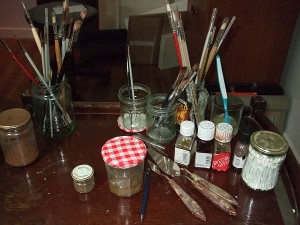 The need to succeed

Ben is driven, in fact he is more than driven, he is a perfectionist. What ever he does he wants to make his mark

“I want to do, what I do well. It’s about fulfilling my potential by the end of my finite time – in a blink of an eye you are dead, I don’t want to get to the end of my life without making the most of it”

Whoa there! That’s quite an attitude, but actually its a young man’s attitude, He  has a lot of talents and he’s keen to make each one work for him.  But the under belly of this determination is his annoyance with himself when he doesn’t go all the way to the highest plinth every the time.

He is a talented academic, he won a prize for his Masters, but no prizes for his Doctorate, life got in the way and he is cross with himself. 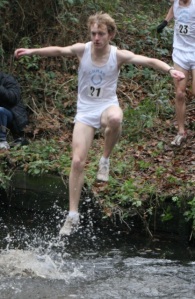 He is a competitive runner, he was an international schoolboy,  and earned four Cambridge Blues for cross-country. He has run a half marathon in one hour seven minutes which is Olympic standard fast but he’s had endless injuries which have knocked back his chances, he is after an England vest.  He has another two competitive years to make it. When I met him he was just back from training with the top British runners at altitude in Kenya having sustained an injury which prevented his doing the London Marathon.

The disappointment made him  consider if he should choose between running and art but realised that he just could not give up now.

He told me he now aimed to paint every hour of the day that he was not eating or running , allowing himself a film on Sunday afternoons. Sounds horrendous, but in practice I don’t think it works out like that, as we ate his home-made scones and lunched off his home-made humus which is remarkable for someone who only paints, eats and runs. 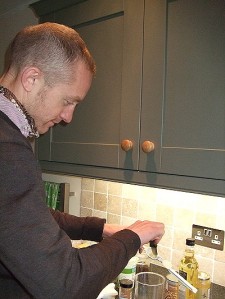 Ben is a man who likes to get his ducks in a row, he plans and prepares with huge diligence.

His still lifes are small but are minutely detailed and they take a long time . In fact small pieces are no quicker to achieve than larger ones as they require just as many changes of tone. So finding a block of  time to complete a picture has been an issue. 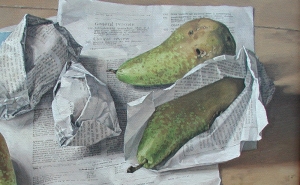 “I began the pears painting towards the end of my summer break,  just before beginning my final year at Warwick University. I remember it wasn’t finished by the time we were due to go to Wales on holiday so I balanced the entire scene on the back seat of the car and completed the piece in the kitchen of my Aunt and Uncle’s house in Broad Haven!”

That is typical, problems are to be overcome, even if his solutions are slightly eccentric. Hence the rig up in his studio to maintain a constant light so he can paint at anytime and the lighting and shadows  remain constant.

Hence also the extraordinary drafting lines on this canvas to make sure the perspective is   “absolutely right”  This he worked out with the canvas on the floor, extending the lines from the objects with string .  Bizarre, but clearly you can’t take the scientist out of the artist. 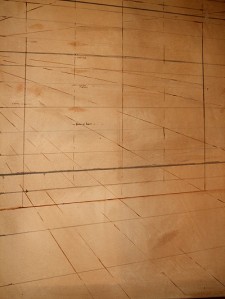 Benjamin already has a reputation for his remarkably detailed realistic still lifes even though he has only painted a handful. Mysteriously, despite not having done any painting in the intervening year, each picture is even better than its predecessor. 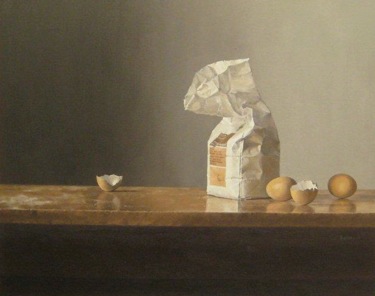 This took 9 days of six hours of work a day and was done in real daylight. It is the picture he did on leaving the bank to make sure he could still paint

Up until now his life has been about preparation for his artistic career  After his PhD he worked three years in the city as a analyst at Barclays Capital to amass  a pot of money to clear his debts and keep him afloat for the first few years. He then bought himself the Greenwich  flat as somewhere to live and paint, spending three months having it refurbished

It’s a  city boy refurbishment, his clothes are  crammed into hold-alls as there is still no wardrobe,  but one glance at the bathroom  tells you that  nothing less than state of the art will do.You can’t work for three years in the city for a mega salary without some of it rubbing off. 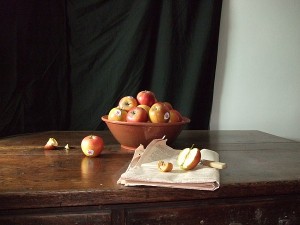 His painting equipment is just as high-end. The table bought for the studio to place his still life on cost £1000 . All his equipment is the best and it is new. He has written to his hero, the painter  Peter Brown to find out what outdoor easel he recommends. He has established no budget for his equipment spend, he is just keeping all the receipts. 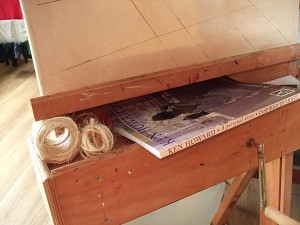 His time in the city could be the making or the breaking of him. In one way it has taught him to live well and enjoy the best, he has worked out that he can live on £30,000 a year. But to prepare to do so he has just spent a lot of money, he will miss that ability to spurge on a piece of kit he really wants. It will be a struggle to drop back down to studenty living. 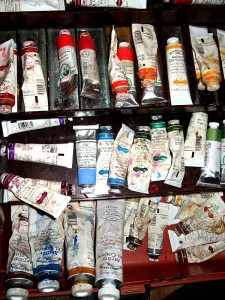 On the other hand the city has shown him a different way of doing things, he is far more marketing savvy and understands that he must target the rich to get the prices he needs to aspire to. His city years have given him a connection to that world. Just before he left Barclays Capital he advertised his work on their intranet which goes to 37,000 people and picked up 10 commissions.

He ditched his old website which was charming but made  him look like an Old Dutch Master and is having it professionally  re-worked by Ochil Studio into something sleeker and more suitable for his intended city buyers. He is getting mates rates for the redesign because Ochil studio is run by his cousin. 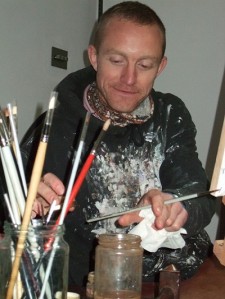 He is extraordinarily lucky to have had full two days of intensive advice from a friend who is a top specialist in business advice for creatives. This has helped him put together a clear five-year plan of how to go about things and to consider what he wants to achieve.

She told him that he should try to work directly with his clients and not through a gallery and put on his own shows, if possible in the salons of the rich and at the key selling times of year.

Her reasoning was that a top gallery expects to take over and direct their artist’s entire output and represent them exclusively  in the Western world, and would always take a large tranche of the price. Ben is a little disappointed not to be allowed a very grand gallery, he likes the idea of walking down Bond Street arriving at the opening party as the famous outsider to be feted by all. 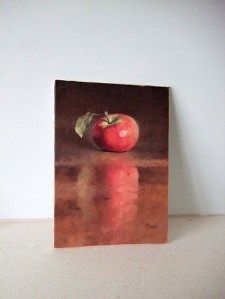 She also taught him how to handle commissions and the need for a contract so even if the picture never makes it to finished piece he will receive payments along the way. There should be payment for the initial consultation and sketches and another for the final compositional designs so that even before bush is put to canvas for the final piece the artist has received 50% of the final price.

She made him define his goals and then timetable the year to facilitate that end. So because Ben is ” a sucker for letters after my name ” he should timetable the submission dates for  the relevant shows like the Royal Academy show or the BP Portrait Award and timetable in the time to produce a piece to submit. 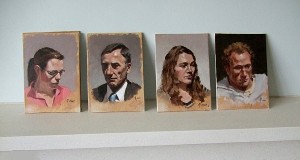 She also helped him see the sort of price that this part of the market is likely to accept, for example she thought his  oil sketch portraits should sell comfortably for £600. This must be good news as they are relatively quick to do,  the last portrait Ben did took  two hours, but the first portrait took five, as he had to discover how to do it. He is keen to expand the portrait painting as he enjoys meeting people.

In addition to portrait painting Ben also wants to expand into landscape, painting  views of  Blackheath, Greenwich and Canary Wharf  which will appeal to his intended clientele. However that must wait for the acquisition of the perfect outdoor easel and sufficient nerve

“I need to conquer working outside, at the moment I would be crippled by working in public view “ 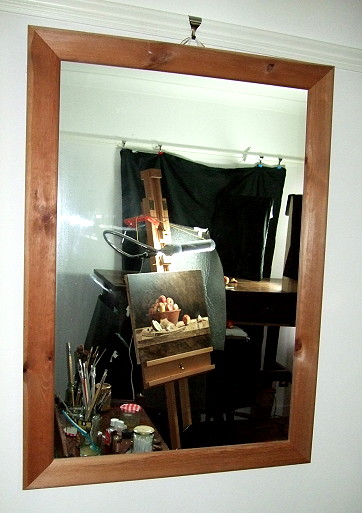 Last year Ben thinks he made about £1000 from his painting this year he is aiming for £20,000 it’s a big ask, especially with his running commitments.

There is a sensationally good resource for UK artists it’s so good I am linking  it here, its run by the University of the Arts London,  Artquest